Controlling Japanese Beetles Around the Home

The Japanese Beetle is a pest we are all probably familiar with. They seem to like exactly what we like and don’t mind feeding on our precious fruit crops. This pest was accidentally introduced into the US in 1916 and was initially discovered in New Jersey. If you have issues with Japanese Beetles in your garden, and you likely do, this article will help you gain an understanding of how you can better control these pests.

Japanese Beetle grubs overwinter in grassy areas like lawns and pastures. In the spring these grubs will move closer to the surface of the soil, where they feed on roots and complete their pupation into adult beetles. About mid-June in most parts of North Carolina, these adult beetles emerge and do so with an appetite. They then feast on local plants for a couple of months, which just so happen to be your precious roses, peach trees, blackberries, and so on. Females will lay eggs in the soil by digging small holes and laying eggs about one to three inches deep. These eggs hatch and feed on the roots on the lawn, eventually burrowing deeper once colder weather settles in.

Adult Japanese Beetles prefer up to 300 different species of plants to feast on, but you’ve probably seen them most often on your roses, apples, peaches, blackberries, and sweet corn. You may even notice that they only infest one or two plants in your yard and mostly leave other plants alone. This is because plants emit a pheromone that, when damaged by feeding, attracts other beetles.

The calling card of Japanese Beetles is a “skeletonized” leaf, as they eat away at the middle parts of the leaf and leave behind the veins. Where you find damage, you usually find beetles, so have a good look around to see if you can find any to confirm. Usually, the damage from Japanese Beetles is only cosmetic and, in most cases, doesn’t actually damage the plant long-term. However, when Japanese Beetles feed on cosmetic plants, fruits, and vegetables and/or flowering plants—all of which are less tolerant of damage—then treatment may be required. Lawns can also be damaged but by the grubs and not the adult beetles in most cases.

Here are some photos of Japanese Beetle damage on my peach trees: 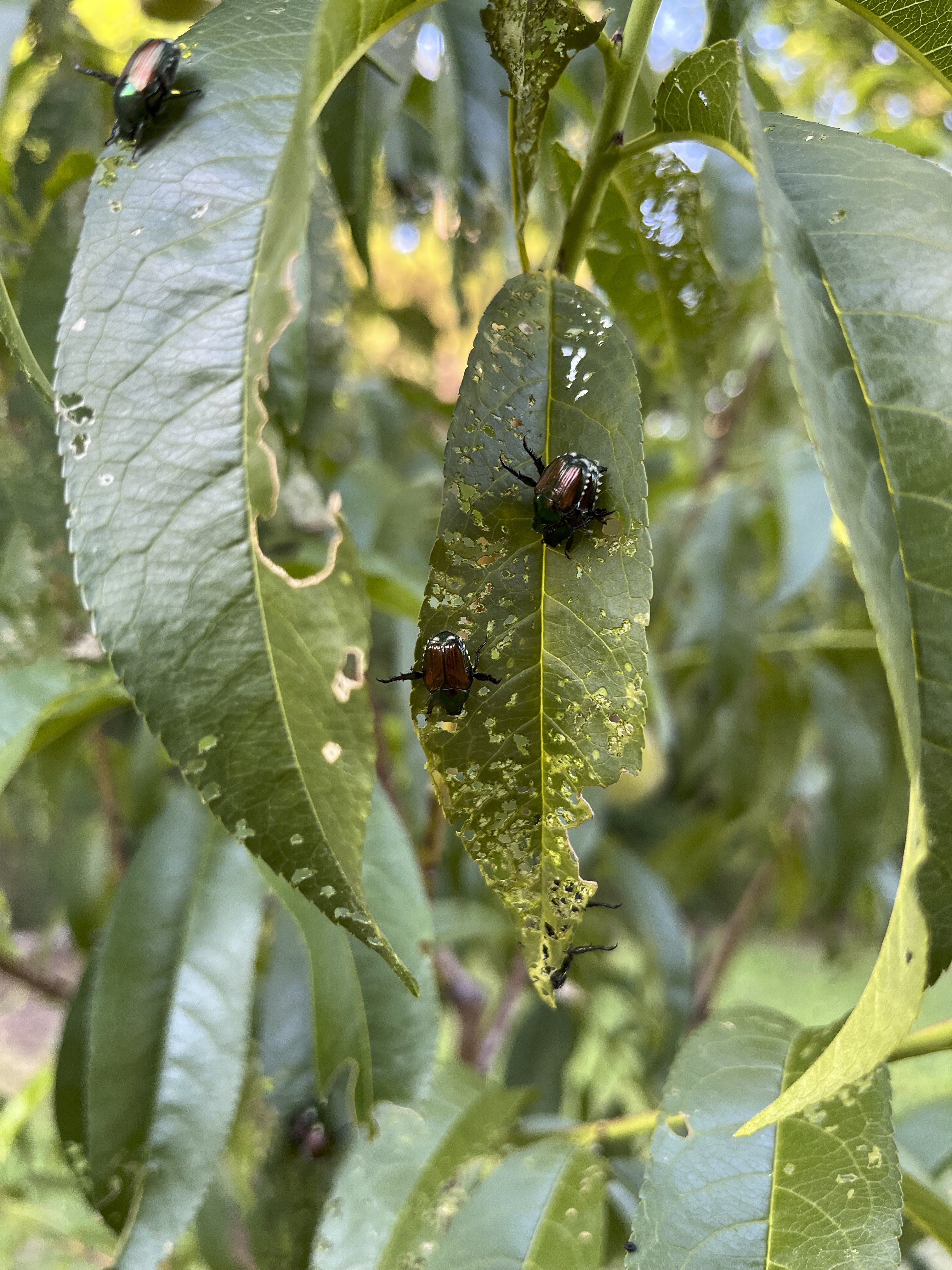 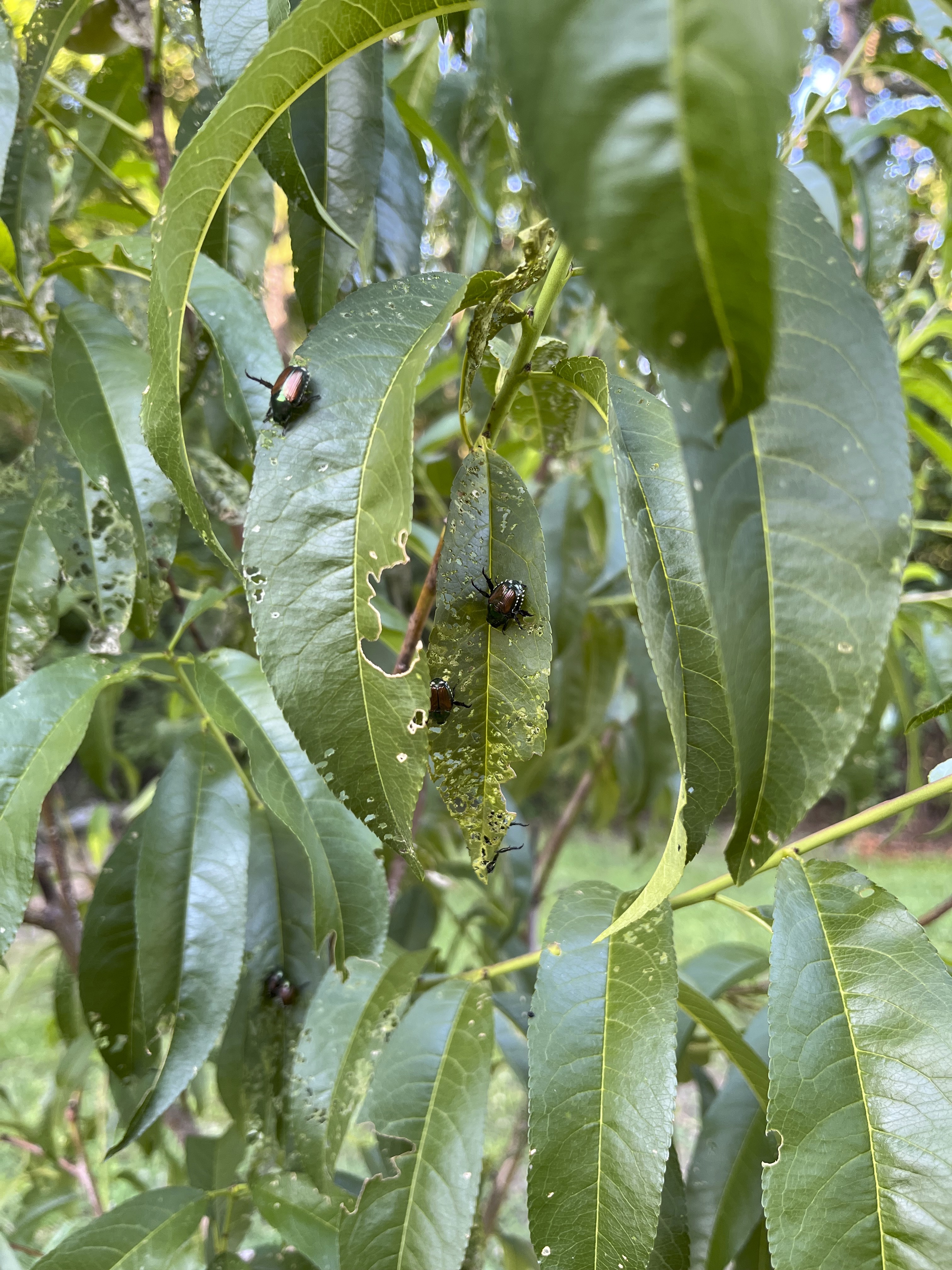 Not all leaves are affected, as shown here. Many leaves on this peach tree are still healthy and bear little damage. 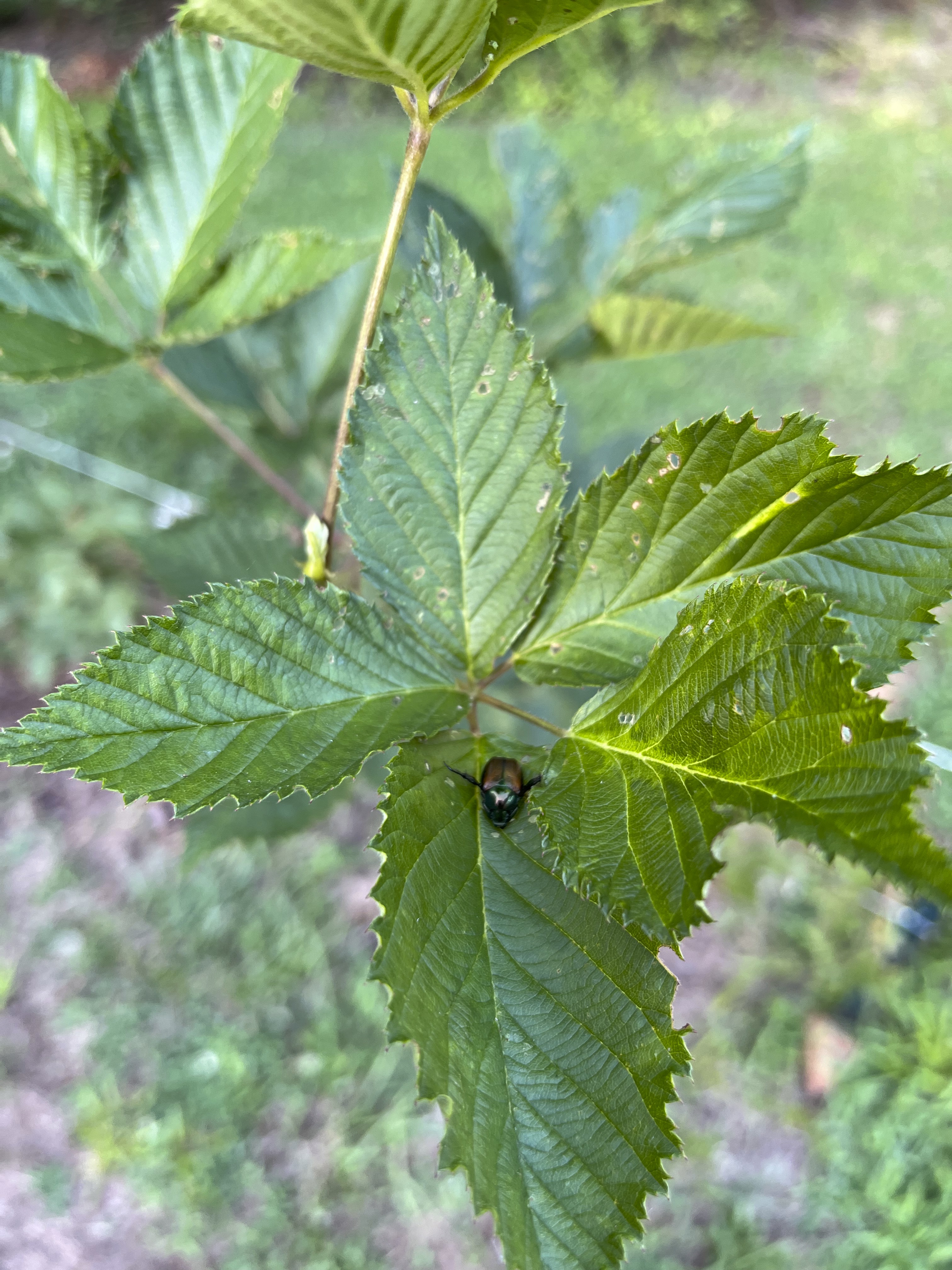 Managing Adult Beetles in the Summer

Before you determine what mode of treatment is needed for your plants, first you should do an assessment. Remember:

After you’ve determined whether treatment is necessary, now you must choose how or with what you want to treat the adult beetles. There are two main avenues for treatment: non-chemical and chemical. You should choose the one you’re more comfortable with.

Non-chemical treatments tend to be more labor-intensive, but you will not need to purchase insecticides and spray around your home.

Physical Removal: This is effective and gives you the peace of mind that beetles are no longer on your plants. Simply pluck the beetles off the affected plants and submerge them in soapy water. It’s best to do this every day and by doing so you can reduce the number of beetles on your plants and reduce the number of beetles attracted to damaged leaves.

Barriers: Netting, for example, works well at reducing the number of beetles on plants. However, be careful not to use netting or other barriers that restrict other insects from entering while the plant is in bloom because anything that prevents insects from entering also restricts pollination!

“What about those traps I can buy at the store?”

These traps were initially created to trap Japanese Beetles for researchers but have since hit retail shelves. They attract beetles with synthetic sex hormones to a trap that prevents them from exiting. In many cases, these traps only increase the number of beetles in your garden since the hormones are intended to attract beetles. Basically, they bring in more beetles than would have shown up otherwise, with no promise of actually catching them.

“I read in a magazine that four-o’clock flowers kill Japanese Beetles. Is this true?”

Chemical treatments are typically less labor intensive but require reading the label and careful adherence to the directions. Treatment may differ based on which plant is infested and needs to be treated.

Peaches: Peach trees are commonly infested and the infestation can be heavy. In a home planting of peach trees, Japanese Beetles may be the only pest you have to treat for in your peaches. There are two insecticides approved for use on peaches to treat Japanese Beetles, so look for products containing active ingredients carbaryl and imidacloprid. Be sure that the product you choose is labeled for use on peach trees before you purchase it. Inspect trees weekly and continue application as needed.

Blackberries: My blackberries were not heavily infested, but that doesn’t mean yours won’t be. Application of insecticides is only needed on blackberries when infestation is very high. Products containing the active ingredient carbaryl will provide adequate protection from Japanese Beetles. Read the label before purchasing and ensure the product is approved for use on blackberries.

Muscadines: Like blackberries, muscadines are fairly resistant to damage by Japanese Beetles. Treatment is only necessary when the population of Japanese Beetles is very high. Products containing bifenthrin, carbaryl, and imidacloprid may be used. Read the label to ensure the product is approved for use on muscadines and apply as directed.

Blueberries: Blueberries are not as commonly infested, but populations of Japanese Beetles may still be found. Unlike most other plants, treatment of blueberries for Japanese Beetles is normally not required. The only instance when an insecticide is needed on a blueberry bush is when damage is so great that the bush begins to defoliate. If application of insecticides is required for pest control, products containing carbaryl and imidacloprid can be used. Read the label and ensure the product is approved for use on blueberries and apply as directed.

Shrubs, Ornamentals, and Trees: For shrubs and trees on which treatment is deemed necessary, there are a couple of products that can be used. Remember, however, that trees and shrubs can withstand high amounts of feeding if established and unstressed. Products containing acephate, acetamiprid, dinotefuran, and carbaryl are effective at controlling Japanese Beetles and usually other pests. As with the others, read the label and ensure that you apply as directed. Some of the aforementioned insecticides are systemic, meaning they persist in plant tissue and therefore require less frequent application.

Pollinators are extremely important insects to agriculture and many insecticides used can harm species like honeybees, mason bees, etc. There are a few steps you can take to ensure your application of insecticides is keeping our wonderful pollinators safe!

If you have any other questions regarding Japanese Beetle control or the control of other pests, feel free to contact your local Cooperative Extension Center and speak to an Agent.

We also have a few other email lists you can subscribe to.