Find this article at:
go.ncsu.edu/readext?847820
— Written By Cody Craddock

Pruning season for lots of perennials is among us which is a crucial activity that increases your yields and makes for a beautifully tamed plant. Common perennials grown in Rowan County that need yearly pruning include blueberries, grapes, and muscadines. Pruning is often put off and eventually forgotten about because most see it as a daunting task and they don’t want to damage their plants. Pruning is almost exclusively done in the winter when the plants are dormant so that the cuts do not let in pathogens which cause disease. In Extension, we plan plenty of workshops around this time of year for various plants that need pruning. The goal of these workshops is to provide both commercial growers and homeowners the knowledge they need to make the proper pruning cuts. Keep reading for a couple upcoming workshops I have planned!

Let’s first start off by answering the main question most people probably have. Why is pruning such a crucial task? The short answer is that it makes your plants more productive. On a commercial scale, pruning ensures that the plants will be profitable. Without pruning old wood off the plants, the plant wants to bring back all of the previous year’s growth along with generating new growth. Eventually, the plants are growing vegetatively but never bearing a lot of fruit because all of the plant’s energy is going towards the production of vegetation. In short, pruning knocks back perennials to the point where all the new growth is productive and producing fruit.

Blueberries are another commonly grown perennial in Rowan County. Blueberries can be pruned with relative ease in just a few simple steps. The first step is to look down at the base of the plant and redefine the crown. Imagine a circle that is about 12-18 inches in diameter. For reference, a large pizza is usually 16-18 inches. If there are any shoots of growth outside of this area, go ahead and prune them out. Working your way up the plant, remove any horizontal growth that, if it had fruit on it, would start touching the ground. These branches would increase the potential for disease by bringing branches close to the soil. Inching your way further up the plant, start looking for older canes that can be removed. The idea is to reduce crowing, increase airflow, and get rid of older and less productive canes. Don’t be shy to make a large cut. By doing so, you’ll reduce the number of buds and increase the quality of fruit. The last step is to remove “twiggy” branches with weak buds on them. As a blueberry bush ages, it starts to grow thinner branches that are not as productive. If you see any small branches close to the top of the bush with less buds, go ahead and prune them off. Voila; you’ve pruned your blueberries!

Grapes and muscadines are very similar but should be treated differently when pruning. Bunch grapes must be pruned heavily, and you will be removing about 90% of last year’s growth. The old canes that grew in the previous season will not bear fruit, so removing them helps the plant put energy only towards canes that will actually bear fruit. The most common pruning system is cane pruning which means you select a few canes that grow near the head of the vine and tie them to a training structure. These canes should have 8-10 buds and not be spaced too far apart. All other canes can be removed. Leave at least 1 spur cane close to the head; cut this cane to leave two buds – these will provide replacement canes for next season.

Muscadines are pruned a little bit differently but like bunch grapes, you’ll be taking what seems like a lot of growth off. To prune muscadines, you’ll need to find the 1-year-old wood on the vines. This wood is normally smooth and will have smaller “branches” off of it called shoots that contain buds. These shoots are what you need to prune back since too many shoots will cause unproductive plants. Prune each shoot back to 3 buds which look like little buds spaced 3-4 inches apart. The vine will usually send up shoots on older wood, but these normally will not bear fruit.

If you are interested in joining us for an in-person, hands-on workshop, we have a couple planned soon. On February 18, you can join me, along with other folks from Extension, for a hands-on workshop pruning blueberries in Davidson County not far from Rowan. To register for this workshop, please call the Extension office at (704) 216-8970. On February 25, we have another in-person workshop where you can get hands-on practice pruning muscadines at Tranquility Farm. To register for this workshop, please visit our webpage and register through Eventbrite – you can give us a call if you need help registering! 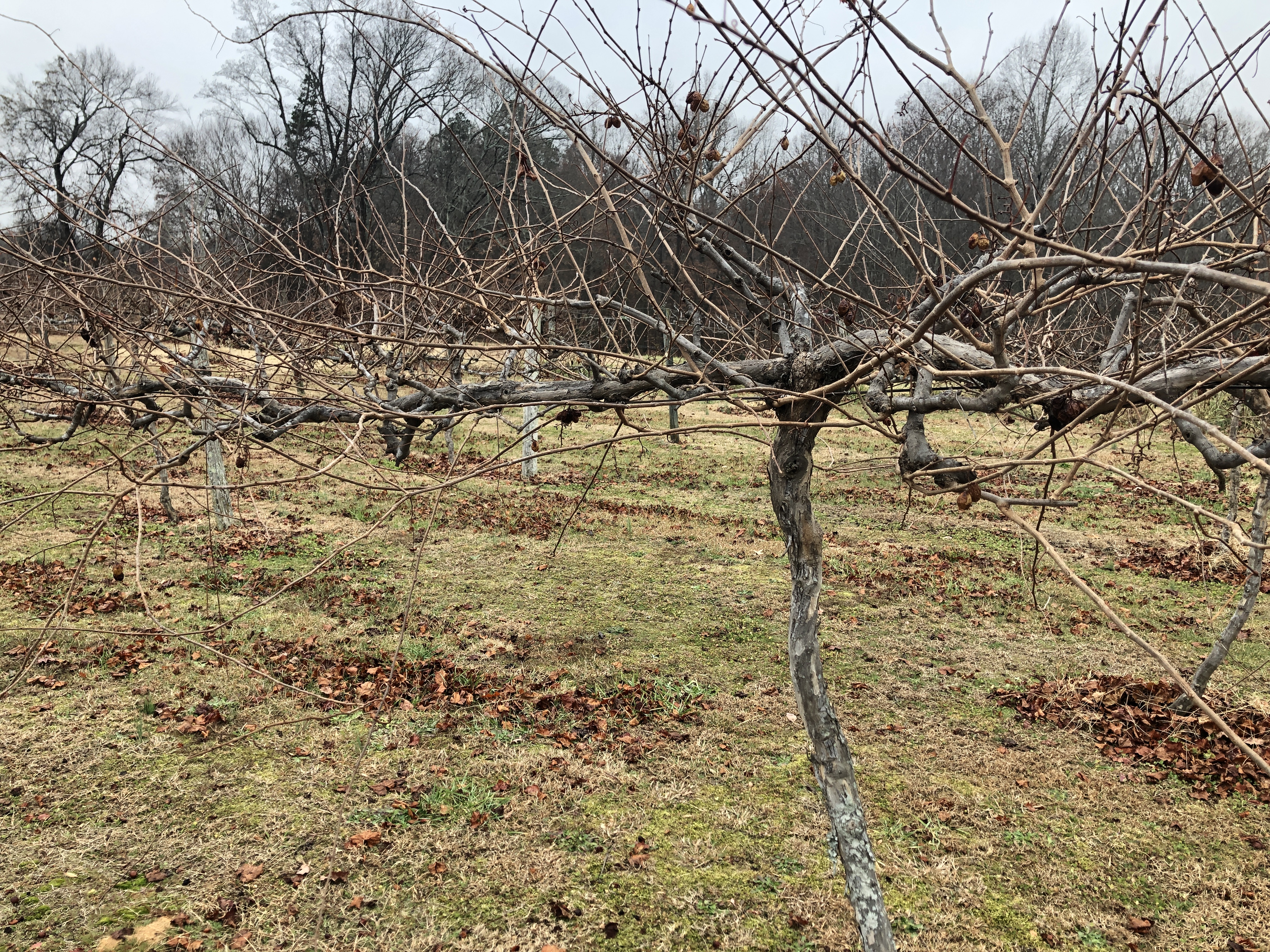 Photo of muscadine vines that will be pruned soon.

We also have a few other email lists you can subscribe to.